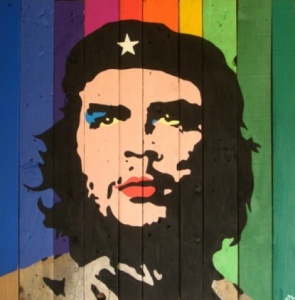 As Ernesto ‘Che’ Guevara was one of the most influential figure in Latin America. His journey through Latin America brought him to becoming an advocate in several countries for the people who suffered oppression by their governments. He strongly believed in the idea of a “new man” who represented the morals of the human race rather than the material aspects of the world. With the phenomena of gay rights, and queer migration in particular, I believe that Che Guevara would have advocated for their rights as human beings, and wanted the world to treat them as equals. This picture perfectly depicts the unity Latin America should have as a people.

Every aspect of the United States’ social, political, economic, and cultural life has been affected by the international migration process. Furthermore, the reasons behind immigration have been questioned among scholars but the correlation between sexuality and migration has been severely overlooked. Luibhéid and Cantú address the important historical issues regarding the lesbian, gay, bisexual and transgender (LGBT) community as well as the current issues happening today. Perhaps the most significant aspect of this book is the impact that queer migration has on migrant lives and sets the pathway for “a movement from repression to freedom” (p. xxv). Although there are current legal and state policies that present challenges to migrants, there has been significant progress from the United States banning of queer migrants in 1917 and 1990. There are two main concerns regarding this idea of queer migration. First being the question of how sexuality shapes the migration process. And secondly, how U.S. immigration and citizenship control strategies are affected by concerns about sexuality. In answering this question, Cantú and Luibhéid acknowledge that the reason these questions are being raised is due to the LGBT community looking to escape their discriminatory regions in search for a more tolerant one, thus making their way to the United States. Protected by the right of asylum, the U.S. has become that sovereign nation that has taken in several members of the LGBT community from Latin America, as their nations have been discriminatory against them. Queer Migrations: Sexuality, U.S. Citizenship, And Border Crossings is a book that addresses the concept of migration that continues to be one of the most controversial issues to date, but goes even further in researching what factors sexuality plays in that very issue. Luibhéid and Cantú present a well constructed narrative of the historical role of sexuality and the relatively modern idea of queer migration.