This is a Mexican Journalist in protest. September 24, 2010 NPR. I chose this image because it signifys how innocent people are still in chains. Despite the Mexican governments “suppose”efforts of protecting the people, by deploying the military into Ciudad Juarez, innocent people continue to be murdered at the hands of drug cartels and gangs.

In the article the author argues that in order to understand femicide and drug-related murders one must  understand gender violence and how its used to ensure the security of a state, specifically Ciudad Juarez. The argument of the article replies on exploring how over the past 25 years the Mexican government has made excuses, of a apparent femicide and later genocide, to hide the true nature of Ciudad Juarez violence. Starting in the early 1990s, the governments explanation for the rising  amount of  murdered  women in Ciudad  Juarez  was that  the women “had it coming.” In other words, the government would  justify  murdered  women by saying  that they  were “public”  prostitutes  or  that they were involved in  illegal activities  that  lead to their death. These explanations caused  the public  to become unsympathetic until the early 2000’s with the introduction of “hijas” by antifemicide activist.Then in 2003  a rise in murdered men shattered the belief that women  were the only ones who “had it coming.”  This belief was shattered when eight men  were found brutally tortured, killed and dumped in a  middle-class community. The author traces  the Mexican governments changes in  justifying the risein murders.  The justification then become that these victims were involved in drug-related activities. Then Mexican  president Felipe Calderon declares a war on cartels and send military personnel  to ciudad Juarez to protect innocent civilians. However, the number of murders rises despite the so called  “protection.” Many Mexican politician and scholars now argue that the sharp rise in death is due to the Mexicans government’s success in  disrupting  illegal drug-related activity.The author goes on to conclude that  gender violence justifications is used  to cover up the real human rights violation:  murdering  of innocent lives.

The article  uses  solid evidence to support its argument. The biggest strength is in how it frames the argument; in theory. The article uses Micheal Foucault idea of biopolitics as well as Achille Mbembre challenge of Foucault’s idea in order to understand narcopolitics  and the  states decision to not protect people,  allowing  its citizens  to die. The author  is also  credible, she’s from the Department of Geography and Women’s Studies at Pennsylvania State University.

The source is useful because it can be used in a large project of examining  Mexicos’  human rights violations since the 2000’s . It also is useful in exploring  the states roll  it its civilian lives and their death. Mexico has allowed a genocide in Cuidad Juarez and hasn’t  stopped the number of  murdered innocent lives from rising. 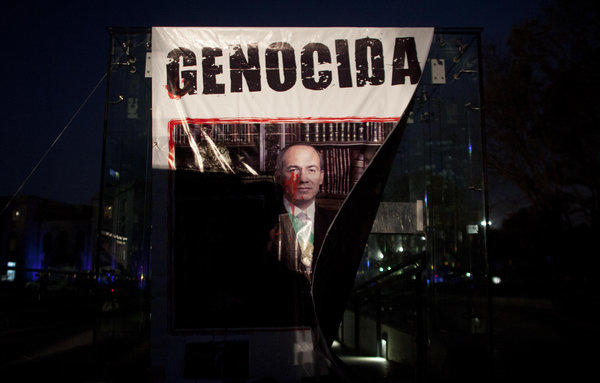 A banner of Ex-President Felipe Calderon defaced. From LA Times 12/1/12 (Alexandre Meneghini /Associated…) I choose this image because ex-Mexican president Felipe Calderon declared the official war on drug cartels however innocent lives continue to be taken, specifically women. This banner was held at a protest in Mexico city as a women from Cuidad Juarez spoke of the violence she witnessed.