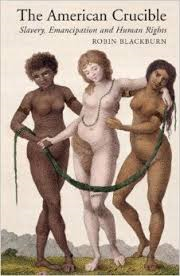 I found the cover of the book online and it has a lot of symbolism in just this one simple picture. I think this photo is very appropriate for the book because it shows how significant slavery was in this time era. It was very rare for African-Americans to be featured on/in paintings in a positive aspect, and this represented how they and many others (in other parts of America) played a role in society at this time.

In Robin Blackburn’s The American Crucible: Slavery, Emancipation and Human Rights, he talks about the rise and fall of slavery in the Americas, and how colonization changed the New World forever. It focuses on a span of nearly four hundred years, and how many countries and people were affected by slavery, asserting how it was one of the certain factors to Western economic and military dominance. Slaves were very useful in this era and were significant contributors to the Industrial movement, resulting in the raising up of empires and stimulating new cultures of consumption and industrialization. Blackburn argues that the anti-slavery movement that came about in the 1800s set great acts of emancipation for many countries such as Haiti, Britain, the United States, Cuba, and Brazil, and forged many of the ideals that we live by today.

This book is very detailed and would fit perfectly in an upper division course, but Blackburn did a great job at incorporating all the main and important details of this era into 500 pages. It is not an easy read, but the complexity of this book is necessary to describe such events that took place in the history of the Americas. He includes many footnotes at the end of several pages to help the reader understand what he is talking about or to cite his sources. Blackburn incorporates his own interpretations and analyses of the main topics such as slavery, emancipation, and human rights, which making the book more interesting to read, hearing opinions that might be much different than yours. It was a little difficult for me to understand this complex book due to the author’s vast and comprehensive knowledge of this revolutionary era in the Americas, but Blackburn did a good job at the presentation and methods used.

More specifically, this book is a very useful tool for my research and themes in this course because within its’ chapters it talked much about Latin America. It is a very diverse book because it focused in on certain concepts and events that took place in these Southern countries dealing with slavery and the slave trade, and not just in North America, which is a general history topic. Blackburn discusses how the turmoil of the American, French, and Haitian revolutions had some echoes in Spanish and Portuguese America. He takes these broad concepts and focuses in the outcomes they had in Latin America countries. This book was very useful because I was able to relate the events in Latin America to those in North America that were already familiar to me, which made it easier to comprehend. I recommend this book to anyone who is interested in expanding their knowledge of slavery, emancipation, and human rights and how they played a role in the future development of the Americas.