Kelley, Patrick William. “On the Poverty and Possibility of Human Rights in Latin American History.” Humanity: An International Journal of Human Rights, Humanitarianism, and Development 5:3 (2014): 435-451. 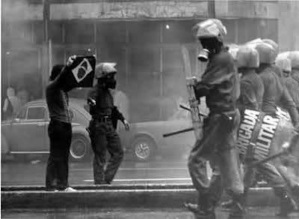 I selected this image to accompany Kelley’s annotation because it appeared on the top of The Yale Review of International Studies, published by Paulo Coelho Filho in the February 2012 edition. The image is in an article that exposes the brutality of the military government in Brazil, a topic Kelley tackles as well.