The author talks about how the start to eliminating the harassment against the LGBT community in private clinics, is to start with societies homophobia. She gives an example, describing her interaction with one of the victims, Jorge, a transgender man who was constantly physically attacked at a private clinic and forced to stay away from his girlfriend. The clinic promised his family that there were “behavioral modification programs” to fix his “conduct disorder” which they call “dehomosexualization.” She mentions how about 200 of these private clinics are known as “Nazi clinics” and they demand a militaristic punishment. It all goes back to the absence of a common set of standards/expectations of the clinics. The fact their program is based off of Narcotics Anonymous and Alcoholics Anonymous is a recipe for a corrupt system. There’s no type of training or credentialing of the employees, which is bound to lead to malpractice.  Even though governments have claimed to close down 100 facilities and open up some public ones, there’s still the issue of widespread homophobia and the other private facilities that are still practicing these dehumanizing crimes.

The author’s strengths were recognizing both perspectives to this issue, even though biased towards one side. This was demonstrated when discussing the updates on the governing of the private facilities by the Ministry of Health, but also showed their recent absences to enforce the regulations. The Ministry of Health officials tried to close down some of the clinics, but those same clinics would just move to a different location. This is a clear indication of lack of enforcement which is a direct violation of human rights, targeting a specific group’s gender identity. It was finally a public matter, but after 10-15 years is a long time to publicize such an issue.

This is directly related to what we’re discussing about in this course, violation of our basic human rights. Brutalizing someone because of what they choose to affiliate as their gender identity, gives no one the right to target them. The worst part about cases like this and other human rights violation is that the government is either in on it or pretends to do their best to enforce the law to protect them, but show a lack of doing so. A pattern that is usually seen in cases like these, and other human rights violations, is that the oppressors usually get some sort of financial gain. In this specific case, families would deceive their own relatives to “cure” them of their gender identity by paying however much it costs, which in return benefits the employees at the clinics, and possibly the government. Activists in this case, and in many others similar to this one, are continuing to protest in hopes for an immediate change. 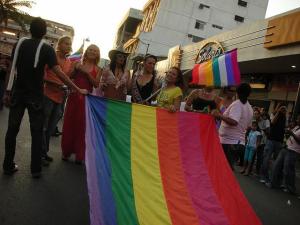 This picture was taken at the LGBT March in Machala, Ecuador on Nacla.com in hopes to spread awareness on the widespread violent hatred of the LGBT community and lack of government regulation.