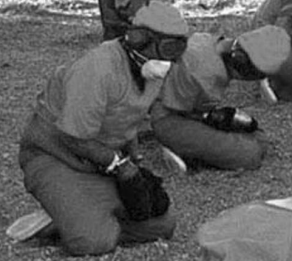 During the late 1960’s and 70’s, the United States and the Soviet Union were immersed in a clash of ideals while in the mist of a nuclear arms race. Better known as the Cold War, this battle compromised the sovereignty of third world countries all over the globe especially in Latin America in regions such as Guatemala, Argentina, and Cuba. The containment strategy, aimed at stopping the spread of communist influence was used by the U.S., mainly to replace leaders in these third worlds regions with “democratic” figureheads who were willing to represent U.S. interest.

Ultimately, this caused a repressive state apparatus by right-winged military forces though out the territories. The most brutal acts resulted in disappearances, limited freedom, and torture tactics. The worse part of it all is that the post-Cold War era ended in impunity where many of these acts were left unrecognized and accountability never justified. Although the Cold War officially ended in the early 1990’s, leaving the United States as undisputed hegemony, it also ended the credibility factor that gave reason for US imperialist to intervene in other countries; that was until September 11, 2001.

On this infamous day of September 11, 2001 the asymmetrical attack planned and successfully executed by Islamic radicals, crashed a plane into the Twin Towers inside the domestic borders of the United States, causing thousands of civilian casualties.  Although tragedy, shock, and psychological aspect of state terror still looms to this day, the U.S. bureaucracy still found a way rebrand this disastrous event to into a new motive for territorial intervention, validating military objectives and rallying support for its actions. This is better known as “The Global War on Terror.”

Replacing “containment,” the objective of the “War on Terror” essentially seeks to justify similar goals, these goals include but are not limited to territorial intrusion, passing off coercive actions as safeguarding mechanisms, all while regional imperialist enjoy impunity. As a repercussion to the September 11th attack the Bush administration, opened up a detention facility in Guantanamo Bay, Cuba where accused “terrorists” were subjected to the most harsh living conditions and treatment. Due to the geopolitical location and ambiguity of classifying the detainees, these prisoners were refused basic human rights laws both domestically and internationally by the United States. 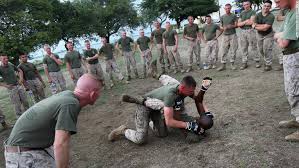 As a result of failing to recognize these laws, the Guantanamo Bay prison and the torture of its detainees remains one of the most relevant and exemplary cases of intrusive military intervention and torture in history. For this dossier we will focus on the gross human rights violation inflicted on there detainees and how the Global War on Terror gives the United States justification for involvement and leeway for human rights law violation. More specifically, we will focus on the origins of the Guantanamo Bay prison and conditions that the prisoners are subjected to, particular laws international law it is in direct violation of and how it is fairly similar to repressive regimes that took place in Latin America during the Cold War era; specifically under the rule of Peron, Batista, and General Efraín Ríos Montt regimes, which staged aggressive repressions. 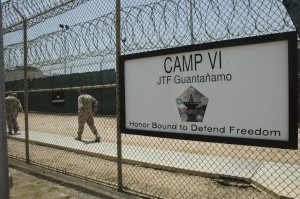 epa01423000 In this image reviewed by the US Military, and made available on 24 July 2008, a sign marks one of the entrances to the detention center, at Guantanamo Bay US Naval Base, in Cuba, 23 July 2008. EPA/RANDALL MIKKELESEN / POOL IMAGE REVIEWED BY U.S. MILITARY PRIOR TO TRANSMISSION 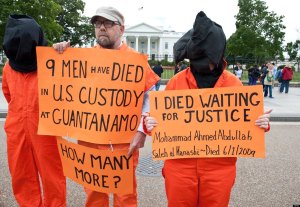 Protresters demanding the closing of the Guantanamo detention facility and the end of the ongoing hunger strike by 103 of the inmates stand outside the White House in Washington on May 24, 2013. US President Barack Obama Thursday laid out new guidelines for drone strikes abroad and launched a new bid to close the Guantanamo Bay prison, seeking to rein in a “boundless” US war on terror. AFP PHOTO/Nicholas KAMM (Photo credit should read NICHOLAS KAMM/AFP/Getty Images)