A Multi-country Analysis of Human Trafficking in Latin America

As is any other industry, human trafficking is essentially based off of supply and demand.  In particular, however, the industry feeds off of the vulnerability of others.  Human trafficking is fueled by a number of factors — two of which are the lack of availability of jobs and resources within local communities and the consumption of the products of human trafficking.  These elements tend to place people further into vulnerable positions, leaving them with less civil liberties and personal, economic, familial, or any other choices.  The victims of human trafficking are, by our definition, those forced under the hands of others or into situations in which they have little control.  Therefore, their sense of citizenship is diminished as, if they are trafficked without consideration of their belonging to a state or between borders, there is little means with which a state is able to protect their rights.

A full model of human trafficking must consider all known factors within the cycle – socioeconomic, political, etc.  Given the variety of communities at hand, however, this will not be our approach.  Rather, we will divide Latin America into three areas of study: the Caribbean, Central America, and South America.  This will condense a report on these countries’ immediate struggles with human trafficking given the nature of their individual economies and histories, although we recognize that this could not fully encompass the complexities of the matters with which they are dealing.  From there, we will discuss countries within which we believe lie some of the key modes of human trafficking within the individual regions.  These countries are Haiti, Costa Rica, and Brazil.

To choose which countries to focus on, we consulted the U.S. Department of State’s Tier Placement System, created to monitor and combat the trafficking of persons. A description of each tier is as follows:

Countries whose governments do not fully comply with the TVPA’s minimum standards, but are making significant efforts to bring themselves into compliance with those standards.

Countries whose governments do not fully comply with the TVPA’s minimum standards, but are making significant efforts to bring themselves into compliance with those standards AND:

a   The absolute number of victims of severe forms of trafficking is very significant or is significantly increasing;

b   There is a failure to provide evidence of increasing efforts to combat severe forms of trafficking in persons from the previous year; or

c   The determination that a country is making significant efforts to bring itself into compliance with minimum standards was based on commitments by the country to take additional future steps over the next year.

Countries whose governments do not fully comply with the minimum standards and are not making significant efforts to do so.” 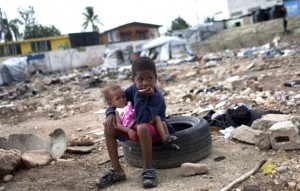 Six-year-old Charles Kerby hold his 11-month-old sister Mikerlina Dragon inside the Ste Therese camp, set up for people displaced by the 2010 earthquake, in Petion-Ville, Haiti, in June 2012. Kerby had to drop out of school after the 2010 earthquake to help his working mother care for his two brothers and sisters. (Dieu Nalio Chery/AP)
<http://hereandnow.wbur.org/2013/01/10/haiti-earthquake-book&gt;

Our dossier’s first country of focus is Haiti, which has been on the Tier 2 Watch List for the last three consecutive years. Haiti is described as “a source, transit, and destination country for men, women, and children subjected to forced labor and sex trafficking.” This project’s research shows that the most common forms of human trafficking within this region are child trafficking as well as sex trafficking. This region’s susceptibility to human trafficking is largely due to both the devastating 2010 earthquake, which created greater economic disparities and a plethora of stateless individuals within unsafe displaced persons camps; as well as Haiti’s violent history with colonialism and military regimes, producing a culture of impunity that ultimately does not do enough to help trafficked persons. While it seems that legal means have yet to make an impact within Haiti to liberate trafficked individuals, this report will briefly discuss two specific organizations that provide humanitarian aid to those vulnerable to trafficking, especially along the Haiti-Dominican Republic border—UNICEF and Heartland Alliance International. 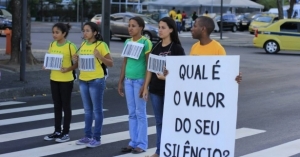 Brazilian Salvation Army volunteers campaigning against human trafficking, within the context of the FIFA World Cup. Portuguese text reads: ‘What is the value of your silence?’ (Credit: Photo courtesy of IHQ Flickr).
<http://my.salvos.org.au/news/2014/06/12/salvation-army-teams-are-on-the-ball-in-brazil-ahead-of-2014-fifa-world-cup/&gt; 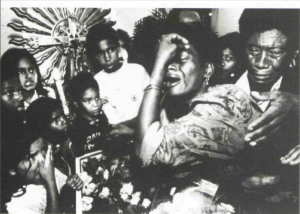 This image was taken from the “Biopiracy and the Global Quest for Human Organs” article and it illustrates a mothers pain after her son was killed by Death Squads in Rio de Janeiro. I choose this picture because it highlights how women in Brazil fear the risk of organ theft in public hospitals and mortuaries. 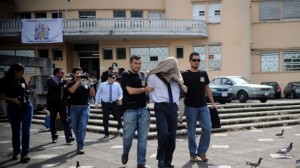 Here, the police have arrested a doctor they suspect is involved in one of Costa Rica’s prominent organ trafficking rings. Following the testimonies of a couple in 2008, officials have been able to round up doctors who they believe were responsible for selling the body parts of Costa Ricans to an Israeli company.
“Dismantling Costa Rica’s Organ Trafficking Ring.” Costa Rican Times, March 19, 2014, Uncategorized sec.
<http://www.costaricantimes.com/dismantling-costa-ricas-organ-trafficking-ring/26164&gt;

Our third country of focus will be Costa Rica, whose new regulations are not only causing internal changes, but have allowed it to move upward in its tier placement.  This gives us another angle with which to analyze a portion of the human trafficking occurring in Latin America.  In the case of Costa Rica, it appears that regulations have somewhat successfully influenced the most traditional cases of human trafficking towards national individuals specifically within the nation’s capital.  Nonetheless, it remains a prominent destination or point of transit for trafficked individuals of other nations. On this subject, some international work has occurred between Costa Rica and Nicaragua in the case of child sex trafficking. Given that trafficking generally involves the involuntary transport of individuals, especially throughout areas outside of the capital, some development is still necessary for more effective regulation.  A flourishing tourism industry has lead to greater opportunities for the sex tourism industry.  The legalization of prostitution has made it more difficult for law enforcers to discern which individuals being marketed by this industry are trafficked individuals and which are legal prostitutes. Furthemore, individual victims have been trafficked as far as Japan, which would make the rescue of such victims more difficult for the local government.

To gain access to the full dossier, click here:
A Multi­country Analysis of Human Trafficking in Latin America