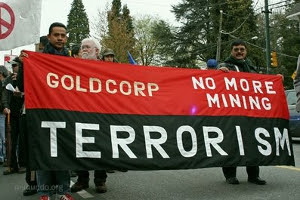 Guatemalans protest Canadian mining company GoldCorp, urging their withdrawal because of the human rights violations it brought about,
hence the slogan “terrorism.”

Guatemala is a Central American country that has a population of 10 million people, with Mayans making up 6 million of the population. It’s a country run by wealthy landowners and big businesses are interested in mining their natural resources for investment purposes. Mining in Guatemala predates to colonial days because metals were used as raw resources for making tools and weaponry. Mineral mining was done for economic gain, and became a part of the international market during the 20th century. The mid-20th century was when Canadian International Corporations proposed to the Guatemalan government to create mining laws to pursue their natural resources, in hopes for cheaper production.

Peace Brigades International examined the mining issue in Guatemala more closely when it became a concern at the national level at the end of 2003. In 2003, the mining issue became a concern because the Guatemalan government gave a mining permit to Glamis Gold, an American company. Glamis Gold and the indigenous people came into conflict when Glamis Gold reopened the EXMIBAL nickel mine to exploit its natural resources.

Mining in Guatemala has been controversial because it puts indigenous people who live around the mining operations at health and environmental risks, but it also has potential to be very profitable for the corporations in charge of these very mining operations. The Marlin Mine is an example of one of the most profitable for Glamis Gold because it has a yield of about 2.3 million ounces of gold and 36 million ounces of silver. By extracting 217,000 ounces of gold and 3.5 million ounces of silver a year, the predicted amount of sales would be $893 million. Thus, a mining permit was granted in November 2003 and the World Bank funded $45 million for Glamis Gold’s project due to the expected high profitability.

The Guatemalan government and the Canadian mining companies believed that these operations would create help develop rural areas, in terms of creating jobs. The members of these communities are claiming that these companies aren’t taking into consideration the negative environmental impacts of the mining operations. The Madre Tierra organization reported an increase in residents that live near the mine with skin, eye, neurological, and respiratory diseases. Apparently, they came in contact with contaminated water, which was then tested positive for poor water quality by non-governmental organizations like Caritas. The poor water quality also affected their agriculture, so the residents had to buy fruits and vegetables; something they could’ve easily grown. 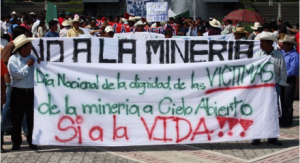 In 2004, the Ministry of Energy and Mines campaigned to lessen the amount of issues with residents. However, the residents continued to protest mining operations. The residents of San Marcos demanded that the mining permits be revoked. An indigenous leader argued, “the state is responsible for ensuring the health and survival of the people.” When the people of Solola heard about the the mining company Exploradora de Guatemala coming to their area, the residents protested and complained about not being consulted first. The residents tried to block the passage of the cylinder used for mining operations, but more national guards controlled the crowd. Despite negotiations, a confrontation in Los Encuentros between the people of Solola and security forces broke out because. This confrontation led to one dead resident and 16 injured officers and the cylinder arrived at the Marlin plant the following day.

This image shows the many indigenous women getting together to protest against the mining operations, in order to protect their land, culture, and community residents.

There are several articles in the Guatemalan Constitution that defend the government’s actions regarding mining permits. Article 125 states, “The technical and rational exploitation of minerals is to be useful and a public necessity.” Article 97 states, “The state, municipalities, and the Guatemalan people have to carry out development in harmony with the environment and establish a regulatory framework so that the use of natural resources is rational and avoids ecological damage.” These two articles indicate how although the land is to be accessible for the public, there should be regulations. On the other hand, the International Labor Organization on Indigenous Peoples published articles that defended the concerns of the residents. Article 6 emphasizes that the government should consult with the residents, allowing them to participate in decision-making to some extent. Article 7 states that the people should have the right to decide their own priorities of the process in development. These two articles signify the Mayans right to consultation and participate in decisions regarding their property.

In 2005, the indigenous people created a Western Front against the mining operations. There were indigenous representatives that organized meetings and conferences to spread awareness and try to form a democracy. One of the largest events organized was the First Regional Conference of Indigenous Authorities of the Western Highlands and the Regional Mayan Legislative Meeting, at which indigenous people demanded respect and land rights. There have been reports of the companies finding loopholes in policies that are already intact. For example, Montana Exploradora bought the lands of certain peasants without informing them of the value their land held. The Mayans see the mining methods as a way of “destroying mother earth” and they believe that anything that harms nature shouldn’t be pursued.

Some observers believe that the World Bank’s loan to Glamis Gold was the reason for the Guatemalan government’s involvement in the mining operations. The World Bank and Guatemalan government are just using the Mayans and their land for economic purposes. The Mayans believed that the wealth coming from the success of these mines will be used for these corporations, investors, and governments’ personal use, instead of their promise to develop the communities in Guatemala.

This isn’t just an environmental issue, but also a human rights issue due to the attacks on innocent residents. Many reporters have received death threats, were injured, or killed for simply publicizing these conflicts about the mining situation in Guatemala. This is an indication of the corrupt government, and that mining law and regulation isn’t completely honest or beneficial for all involved – these reporters were being attacked for a reason – to be kept quiet. One Guatemalan woman testified to her husband being burned alive because of his affiliation with the protests, but there was denial on the corporation and government’s part. One of the main anti-mining leaders, Yolanda Oqueli, stated, “It’s not easy to bear being spat at in the face, being pushed and shoved, the tear gas, the tussles with the police, and we women having to throw ourselves on the ground.” All the Mayans ask for is to be consulted and addressed in an appropriate manner before these mining operations take place, and legally the corporations are supposed to be doing that anyway, so the government is essentially breaking the law by surpassing citizens when issuing out mining permits.

Currently, more and more indigenous people are banning together in solidarity and organizing protests and conferences and seeking foreign aid in hopes to gain international attention to investigate this issue further. So far, more than three dozen people, including the president of Guatemala’s central bank, heads of National Tax Office, and high-profile lawyers have been arrested for multi-million dollar defrauding of the state in customs revenue. Most importantly, several mining licenses such as the Minera San Rafael (a supplement of the mining company Tahoe Resources) license was suspended by the Center for Legal, Environmental and Social Action. Despite these advances, further legal reforms concerning the welfare of the population and their property need to be instigated to remedy current human rights violations and prevent future violations from happening.