The Indigenous Struggle against Neoliberalism in Brazil

If you’ve heard about Brazil in the news over the last decade, you’ve probably heard some mention of its growing economy and entrance onto the world stage as a global economic power. Acronyms like BRIC, with B representing the up and coming Brazil! With the world fixating on Brazil’s economic achievements, a long tradition of turning a blind eye to the costs of achieving “economic success” is perpetuated for this nation. Much of the “development” and “growth” in Brazil’s economy has come at devastating costs to Brazil’s longest standing inhabitants and the environments which have sustained them for thousands of years; these inhabitants are the indigenous people of Brazil. The 2010 Census by the Brazilian Institute of Geography and Statistics, has recorded 305 different indigenous peoples totaling 896,917 persons, with the largest population of indigenous being the Yanomami of the states of Amazonas and Roraima consisting of 25,700 individuals. The International Work Group for Indigenous Affairs 2015 Yearbook Report, Brazil, dictates that Dilma Rousseff’s second term in office as President has indigenous rights at its lowest since Brazil’s return to democracy, after the military dictatorship of 1964-1985. Rousseff’s lack of respect for indigenous rights is attributed to her “developmentalist” outlook, her support of agribusiness, and large scale development projects such as hydroelectric dams and power plants being built to fuel “the growing economy”.

The main governmental organization in Brazil for indigenous rights, The National Foundation for the Indigenous (FUNAI), has the primary function of demarcating lands for indigenous peoples. Yet with a constitutional amendment “PEC-215” being supported by the newly appointed Minister of Agriculture, Kátia Abreu, this main function of FUNAI is under threat; if it passes, it will be obstruct the process of requests to demarcate land and the actual reinforcement of those demarcations. With FUNAI being “the only body with direct responsibility for promoting the rights of indigenous peoples” in the Brazilian government, it becomes clear that Brazil’s current government is diminishing an already fragile enforcement of indigenous rights in Brazil. As megadam projects like the Belo Monte hydroelectric plant in the Amazon are already underway, other indigenous lands are becoming the targets for such projects such as the Tapajos river region inhabited by the Munduruku people.

In both the cases of the Xingú peoples threat by the Belo Monte Dam construction and the Munduruku peoples threat by the Tapajó River Dam project, indigenous people are being met with state repression of their voices. For “Operation Tapajós” federal police and security forces are sent in to protect the government agents researching the Munduruku peoples Tapajós river region for construction of the dam, while the Xingú Vivo Movement leaders actions of protest against the Belo Monte Dam are deemed to be criminal offenses. Critically, there has been no consultation or democratic inclusion of the indigenous people inhabiting the areas affected by these projects (these dams will submerge thousands of acres of indigenous land once completed), and these projects are in “flagrant violation of national legislation and international agreements on human rights and environmental protection.” With the current Brazilian State’s brazen disregard for the indigenous peoples’ rights to their land and security of person, there is significant evidence that resistance by indigenous people is being met with repressive military and police violence. The Indigenous Missionary Council (CIMI) released a report in July of 2014 detailing violence against indigenous peoples, citing a recent increase of 237% in physical and sexual assaults, injuries to persons, murders, attempted murders, and death threats; with police and military presences increasing in indigenous lands, it is hard to ignore the connection. 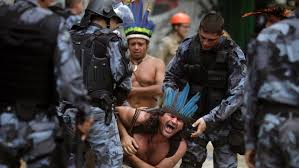 A 2007 Brazilian Human Rights report, published in Portuguese, by the Relatório da Rede Social de Justiça e direitos Humanos (Social Justice Network and Human Rights Report), gives a shocking account of the violence against the Guarani-Kaiowá people in the state of Mato Grosso do Sul, describing it as a “Holocausto” (Holocaust) of indigenous people. The report states that assassinations, rape, physical violence, and attacks occur in the light of day with impunity, often against women, children, and the elderly, often at the hands of hired gunmen of the fazendeiros (large landholders). This report includes statistical data on other facets of daily life in which the Guarani-Kaiowá people experience the struggle for human dignity; it mentions high rates of suicides, depression, infant mortality, lack of adequate or basic medical care, and malnutrition as critical issues facing many of this indigenous population. Not only do they incur blatant violations against the security of person, but the Guarani and other indigenous people across the nation suffer a regular struggle to meet basic needs under the threat of loss (of land or life, or both simultaneously), racism, and cultural persecutions. Much of it suffered in silence, as they fight to gain recognition of their plight.

Yet the Amazon as an entire region in South America still remains one of the most vulnerable areas for human rights as a rural region. In the eyes of the state (and international corporations and interests), it is an area extremely rich with natural resources, and with few and unimportant inhabitants easily moved, repressed, or silenced. The land of the Amazon is fodder for the beast that is a neoliberal growth economy, hungry for its Amazonian bounty. Neoliberal policies are not only enacted by the Brazilian government for economic gains in the Amazon; the Peruvian Amazon faces many of the same challenges as the Brazilian Amazon as its government violates indigenous rights for its own neoliberal agenda. Stefano Varese argues that the violence against the indigenous people of Peru is a natural consequence of neoliberal ideology, which requires an accumulation of capital, promoting the “pillaging”, “plunder”, dispossession, and ethnogenocide of the indigenous as cheap “internal colonies” to subjugate and exterminate for resource accumulation. Varese also refers to the long history of violence against the indigenous people of South America as a “holocaust of the original peoples of the Americas”, reflecting similar discourse to that of Brazil’s view on its colonial history of violence against its “original” people.

Jamie Way’s 2009 Upside Down World article on Neoliberalism in Peru focuses on the Peruvian Amazon as a battleground between indigenous populations and the ideological forces of neoliberalism. Contrasting to the Brazilian Amazon, Peru’s Amazon is being sought for its oil, and as oil exploration and extraction threaten the indigenous inhabitants’ rights to their land, they find themselves up against the large and extremely powerful “big business” that is the transnational oil industry. For Peru, a lack of legal recognition means that they have little recourse or voice against the Peruvian governments neoliberal agenda to sell indigenous lands to petrochemical corporations for oil exploration. The strength in which governments are supported ideologically for their neoliberal agendas adds a layer of difficulty for the indigenous to gain recognition of their needs and fight for their lands. With nation-states forging ahead in their nationalistic endeavors, ideological justifications often lead to justifications for a repressive state apparatus to support “national interests”, and in the case of Peru and Brazil, the main targets of that repression are the indigenous people.
To read the full Dosser Click Here —> Dossier