An audio clip of Alisson Madrid, a 6-year old girl from El Salvador, along with other children being held in Border Patrol facilities separate from their parents. Audio clip was collected by ProPublica, a nonprofit journalist team based in New York.

Hundreds of child migrants from the Northern Triangle, including El Salvador, are caged in by a chain link fence. It is extremely cold and there is little light, except for the occasional glint of the thin reflective emergency blankets which serve as the sole barrier between their bodies and the concrete floor. Some of the children here are just toddlers, yet there are no parents or caregivers in sight. Within the chaos of the Border Patrol holding facility, one thing is clear: these children are not the “killer” gang members the Trump administration warned us about. In reality, the Trump administration’s zero-tolerance policy has disproportionately affected innocent families and children. Rather than preventing “criminal aliens” from entering the U.S., these immigration policies have led to systematic abuse and criminalization of innocent children seeking asylum. This anti-immigrant sentiment is not novel to the Trump administration. The notion that migrant children, particularly those from El Salvador, were inherently violent has been reinforced and reiterated in generations of violence which define the shared history of the U.S. and El Salvador. 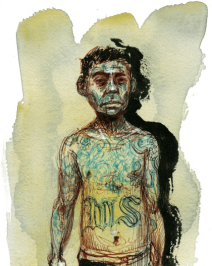 Illustration by Molly Crabapple which depicts a young MS-13 member. “Their faces are scarred and their eyes hollowed by years of dealing out death and taking abuse, making them look much older.”

The arrival of unaccompanied migrant children at the border can be linked back to systematic violence against communities of color in the U.S. which led to the rise of transnational gangs. El Salvador developed a reputation for gang violence which has steadily increased since the end of the Salvadoran Civil War in 1992. The end of the war meant that thousands of Salvadoran police and military personnel trained by U.S. soldiers no longer had jobs. At the same time, members of the Los Angeles based gang La Mara Salvatrucha (MS-13) were being deported back to El Salvador. Mass deportations led by the U.S. and declining employment rates prompted the growth of MS-13 in El Salvador. The MS-13 are now one of the largest and most violent gangs within the Americas: they participate in drug, weapons, and human trafficking and continue to use violence to force children and young adults to join. For many young Salvadorans, the only way to truly escape the wrath of MS-13 is to leave El Salvador in search of asylum.  To deny MS-13 orders is a death sentence.

The recruitment of children for purposes of violence has been normalized in Salvadoran society through violent practices during the Civil War. During the Civil War years of El Salvador children were used both by the FMLN and the Salvadoran Military as tools to support partisan agendas.  On both sides, children were recruited by force with soldiers threatening to kill family members if they denied. Many children joined either side because they saw family members being killed. Children were forced to become messengers, scouters and even soldiers. Children were exploited and left with few options. They were stripped of their innocence and scarred by experiences that many adults will never have to experience during their lifetime. Seeing dead bodies on the ground was their “normal.” From the government ordered murders of farm workers in during the mid 1970’s, to the murder of innocent civilians during the Civil War, violence has always been the unfortunate response to change. The violence Salvadoran children experience at the border, in El Salvador, and in the U.S. today is deeply rooted in this history.

Since generational violence against Salvadoran children is perpetrated by actors both within and outside the state, it is essential to examine this phenomenon through the lens of international human rights policy. In the current study, we will analyze the root causes of violence against Salvadoran children using the framework of the UN Declaration of the Rights of Children which was signed by El Salvador in 1990. The ten principles outlined by this document will orient readers through the case studies presented and allow us to determine the role of international policy in protecting the livelihood of Salvadoran children as they continue to face violence today.