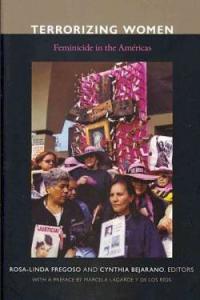 This is the cover image of the book, Terrorizing Women: Feminicide in the Americas. This image captures demonstrators gathering to bring attention to the pervasive gender-driven violent crimes committed against women.

Terrorizing Women: Feminicide in the Americas, chronicles a diverse range of personal accounts of feminicide, otherwise known as hate crimes specifically targeted at women, in Guatemala, Peru, Costa Rica, Mexico and Argentina. These accounts vary from scholarly articles and research conducted by individuals involved in the struggle for women’s rights in Latin America, to firsthand testimonies from victims and their relatives. Analyzing the rise in violence against women from 1993 through 2010, this compilation of voices offers a compelling look at feminicide, and the frequent complicity of the law, allowing perpetrators of crimes to commit atrocities against female victims without fear of prosecution. This book seeks to share individual experiences, while examining plausible motives behind gender-driven violence and potential countermeasures in the fight to prevent it.

Not stopping at just presenting the facts, the editors have included extensive studies alongside a collection of powerful testimonies; the book persists in asking the hard questions, while proposing promising solutions, which leaves the reader with a personal and political perspective of the ramifications of the crimes, and the steps being taken toward positive change. The overall conclusion is that in order for feminicide to stop, a fundamental change is imperative. The solutions offered address and seek to alleviate the systemic problems that both promote the crimes, and demoralize victims and activists when attempting to navigate the reportedly dubious legal and government channels when seeking assistance from authorities. Numerous accounts from well-regarded activists, politicians, and researchers, as well as victim’s recounting of their experiences, lend gravity and credibility to the book.

The book reads like a feminist call to arms, urgent in its thought provoking analyses of political, economic and social elements that carry implications in the epidemic of definitively gender-based violence in Latin America. The implications for the widespread complicity in feminicide are both local and global, and editors Rosa-Linda Fregoso and Cynthia Bejarano are discerning in their shrewd inclusion of academic, non-academic, and political figures in order to represent varied backgrounds. Examining cases of feminicide from several countries in Latin America the book exposes startling similarities between many cases, and the ineffectuality of the authorities in preventing or curbing these atrocities. This book is by turns haunting and heartening; a horrifying account of human rights violations at their very basic level, yet it is through the simultaneous inclusion of exhaustive research, alongside harrowing accounts that Terrorizing Women becomes a gauntlet thrown down at the feet of those who continue to deny women in Latin America, and everywhere, the right to live without fear.

Student in HMR 161
View all posts by Chelsea Fink →